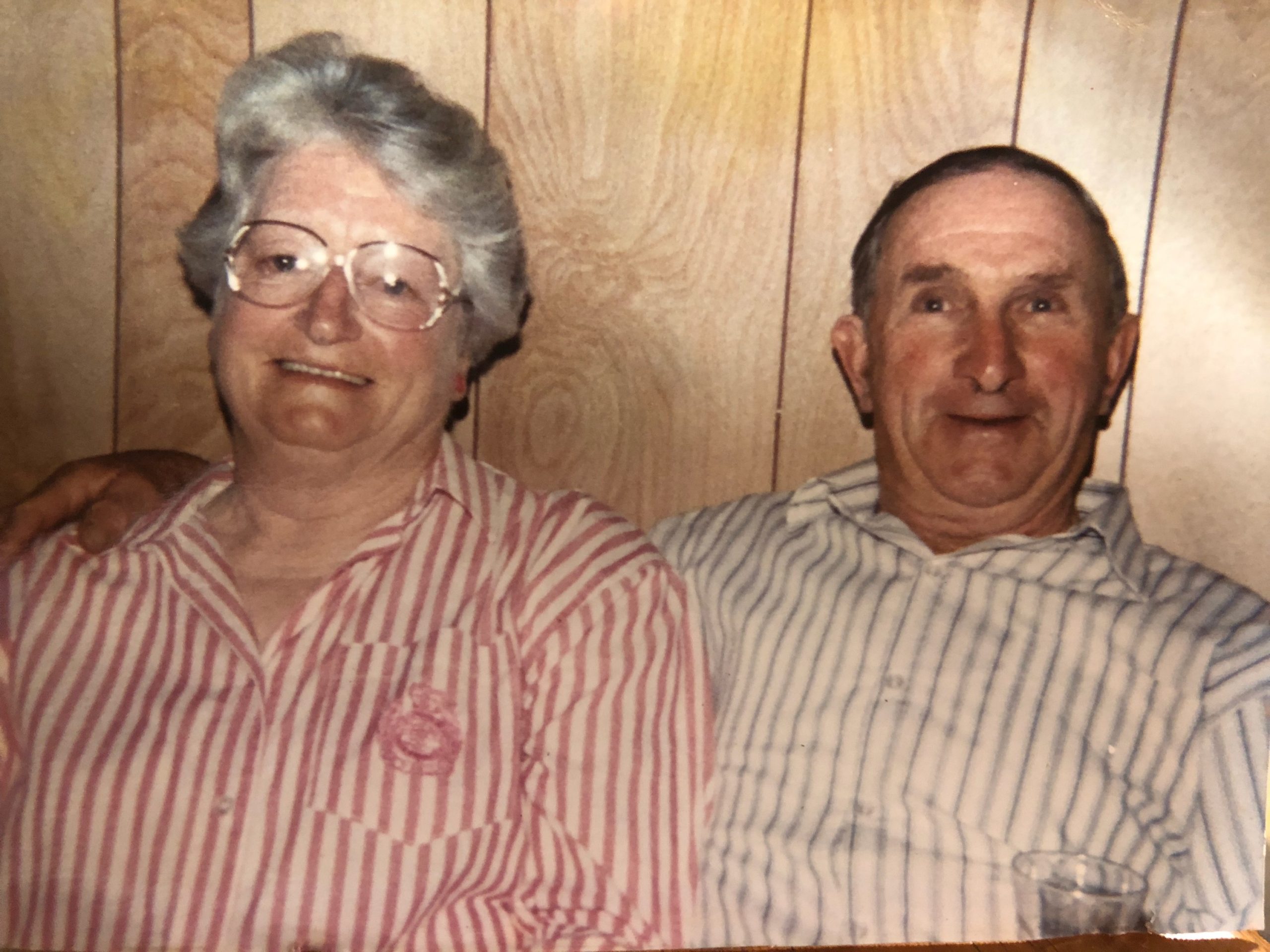 Having been a registered nurse for many years, I have seen lots of funerals run by traditional funeral directors. This has shaped the way I see the end of life process and see the need for choice and change.

Before I talk about my dad’s death, I need to say a little about his life. My dad was born in 1922 the bigger of twins. He weighed 4lb and his brother weighed 2lb and slept in a shoebox. My dad was a man of the land having moved onto the farm at the age of 5, after a 2 day journey in horse and cart from Powranna to Kentish.

His greatest joys in life were simple. He loved his family, he loved the bush, the land and the physicality of hard work. He was awarded a scholarship to further his studies, but instead he chose to stay on the land.

My dad loved poetry, both reading and reciting verses when the situation arose.  As a young man in his teens he was a carer for his ailing mother, administering medication and turning her though the night for comfort until her death.

I feel this experience shaped his decision to have some control and input at his own end of life.

Being a fit active man who was shearing mobs of sheep well into his 60s he approached the local council to notify them he was planning to be buried on his own property. The council clerk at the time suggested that he was getting in a bit early, to which my dad replied “Well it’s too bloody late after.”

And there began his fight.

After having his first choice of burial site rejected, he began the process all over again. After much harassing, haggling and manoeuvring through red tape, his choice of burial site was finally settled.  He had long made his wishes known to his family and would say  “When I’m gone, just put me in a bag and throw me in the bush.”

He had a no nonsense approach to life and this was reflected in his choices. He would say  “I’m not mean, but I hate waste and I believe values are often misplaced. I don’t want to be taken down in a procession to Mersey Vale cemetery in an expensive coffin, after having unnecessary procedures done to my body, then have a minister say things about me that someone else has told him and then have my family pick up the bill for thousands of dollars.”

He wanted a simple resting place on his own property with family and close friends to say farewell. His farewell was to be by invitation only, and we would follow his wishes.

A diagnosis of prostate cancer with secondaries began a slow, gradual decline in his health.

He was wearing out, and was ready to go. One particular morning he woke after an especially painful and restless night and said “I just had a dream that I died…and bugger it I’m still here.”

He did get great comfort from his music, which helped pass the long nights. He was very accepting that his life was drawing to a close.

On September 3rd 1993, his life ended in the company of his family, in his lounge room and in his own home. That night we had the most vicious frost I have ever seen. He remained at home for 2 days, during which time friends and family came and went.

My nephew who was 3 at the time pulled up a rug and had a sleep beside his grandfather on the floor beside his bed. We dressed my dad in his ‘going out’ clothes and life went on around him. On day three, we placed him in his coffin. Provisions were made for a back hoe to dig a suitable hole for burial. A test hole had been dug and inspected and approved previously.

It was now clear to us that it was time for our farewell. We loaded the coffin into the ute, covered it in eucalyptus branches and garden flowers (very considerate to die in spring when flowers are bountiful) and drove it to his chosen site in the shadow of Mount Roland. The actual burial was a fairly informal affair. Anyone who chose to speak was given the opportunity. Many of his adoring grandchildren added treasures to his burial site. He was buried with his hat and his favourite poetry book.

After a few minutes of silence, flooded with a million memories, each person took up their shovel and began to fill in the grave, an enormously therapeutic act. Even his 87year-old sister pitched in with a few shovelfuls.

We then returned to the homestead for a celebration of a life well lived.

One of my dad’s favourite verses by Adam Lindsay Gordon

Twenty-three years later, my mother succumbed to breast cancer. She came to live with me for the last year of her life as she became more physically frail, but mentally as sharp as a tack, completing daily crossword puzzles with ease.

We often spoke of her end of life wishes and she was greatly reassured that she was able to stay at home surrounded by family and friends to the end.  She too chose the same end of life as her husband had many years earlier.

The legal process was fairly simple the second time around. Mum asked her grandson to make her a coffin. As he teaches woodwork, he took on the task, and made a coffin from timber milled from a tree which grew on her farm.  The coffin needed some finishing touches so it had a trip to the school workshop. The students showed little interest in the ‘wardrobe’ their teacher was making.

Mum’s health was deteriorating but every Friday night she would muster up all her energy, dress up and go with her younger friends to the RSL club, oxygen in tow.  She celebrated her 90th birthday in style. Friends and family travelled from near and far to celebrate with her on the day we had 100mm of rain in 24hours!

I view this partly as her living wake, as she was becoming more frail and was only weeks from death.

She expressed a fear of being alone so my sister and I took turns in sitting with her and reading to her until she fell asleep.  Pam Ayers was one of her favourites (I think I can still recite a few of these). We had an excellent palliative care doctor whose straight shooting manner was appreciated by us all.  He was very honest with Mum and reassured her that between us we would see her through.

Mum called her family together, and together with a couple of friends we had a very enjoyable evening of drinks and conversation. The following morning began as usual and mum expressed how happy she was to see all her children together.  As the morning wore on, Mum became restless but wasn’t able to identify what was happening.

We had medication on hand and as the restlessness increased, she asked me to get it for her which I did. She became much more settled and said “Ahh that’s good”, and fell into a deep sleep. Her hands became cooler, her breathing shallow and by midday, her breathing had stopped.

My sister and I were with her. We chose this time to sit quietly and take in the enormity of what had just happened.

The words, ‘pick up the kettle, not the phone’ are so appropriate at this time.

Mum stayed with us at home for 2 days. During this time friends and family came, some wishing to see mum to say their farewell, and some happy to say farewell from afar.

My sister and I dressed Mum in her favourite mauve outfit and placed her in her custom made coffin. It was quite a manoeuvre to het mum into the coffin and my sister and I got the giggles as were both in the coffin at one stage.

On day 3, we just knew it was time for our farewell. The coffin was loaded into the ute and driven to the farm. Family and friends were encouraged to wear something purple as a mark of respect as this was Mum’s favourite colour. Again, anyone who chose to speak was given the opportunity. After a silence, Mum’s granddaughter sang Acapella under the grand shadow of Mount Roland, and the children added their garden flowers to the burial site.  Again we took up our shovels and began the process of filling the grave. We then returned home to celebrate a good life.

The burial site is now marked with a paddock rock with two small, simple plaques. Daffodils pop up each spring, wedge-tails soar overhead and wrens hop about.

I feel extremely fortunate to have been able to care for both my mum and dad through their illness and then after their deaths. To be able to perform that last loving act is a treasured memory. I am forever grateful to my dad for being proactive and being ahead of his time.

Developed with assistance from the Tasmanian Community Fund